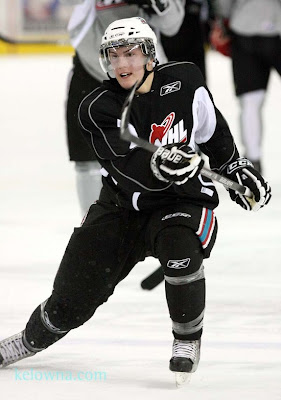 Tyson Barrie has been named to the training camp roster for the Canadian World Junior Team.
Barrie has 4+18=22 points in 18 games this season and most recently became the Kelowna Rockets all-time leader in points by a defenceman.
Barrie, the Rockets captain, has 192 career points.
Barrie is attempting to follow in the footsteps of former Rockets like Brandon McMillan, Jamie Benn, Tyler Myers, Luke Schenn, Blake Comeau, Shea Weber, Josh Gorges and Chuck Kobasew to wear Canadian colours.
Jared Cowen of Spokane, Ryan Murray of Everett, Brayden McNabb of the Kootenay Ice and Mark Pysyk of Edmonton make up the other WHL d-men attending the camp.
Kelowna resident Curtis Hamilton (Saskatoon Blades) has also been invited to the camp.
Team Canada's training camp will be help December 12th to 15th in Toronto.