Who is the next HC of the Kelowna Rockets? 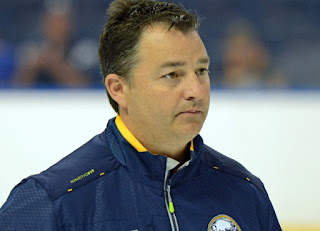 The winds of change blow again!

I can't take this!
I know, I know, its sports where change is inevitable.
The Kelowna Rockets lost another great head coach when it was revealed Monday that Dan Lambert is stepping aside. It came as a shock to many. How can it not? Lambert spent one short season at the helm of the team as head coach and took them all the way to within one goal of winning the 2015 Memorial Cup.
Lambert's stint wasn't supposed to be this short was it?
With connections in pro hockey, you knew his time would be limited in Kelowna, but I would have never expected him to set sail after just one season.
While wet behind his ears as a WHL head coach, the 45 year-old originally joined the franchise for the start of a the 2009-2010 campaign as an assistant to Ryan Huska.
Clearly he grew leaps and bounds under Huska's tutelage.
What are the Kelowna Rockets losing? Lambert had passion for the game, wore his heart on his sleeve and was a player's coach through and through. He wanted to win, not for his own resume, but for his players to experience what he did as a 19 year-old defenceman with the Swift Current Broncos in 1989. Lambert is a Memorial Cup champion and MVP.
The Western Conference nominee for coach of the year in 2015 had immense pressure to bring a team together last season after it was torn apart, from a chemistry standpoint, with trades involving Carter Rigby, Colton Heffley, Jesse Lees, Austin Glover, Kris Schmidli and Dalton Yorke. Many tears were shed when the existing six players were traded away. It was a massive shake up within that Rockets locker room. It created a lot of turnover in a short period of time and resulted in very strong personalities invading the dressing room in Josh Morrissey and Leon Draisaitl. Acquiring new faces with high end talent often backfires. Just ask the 2011 Saskatoon Blades.
Lambert, with the help of assistants Kris Mallette, Travis Crickard and athletic therapist Scott Hoyer deserve ALL, not some of the credit, for getting the players to buy in while putting their personal agenda's to the side in order to win the Ed Chynoweth Cup. Mission accomplished.
Lambert, like his predecessor Ryan Huska, will go down as one, if not the most, media friendly head coach I have had to deal with,. Huska was a delight. Lambert was off the charts fantastic. I knew as the broadcaster of the team that I had something special going on between head coach and radio guy and never once took it for granted.
Lambert showed his true colours at the Memorial Cup in Quebec City when he met with the media daily. 'Lambo' was calm, cool and almost giddy at the fact his team was one of four playing in the late stages of May. He was smelling the roses as he saw his team advance to the Memorial Cup final by enjoying every minute. Maybe even then Lambert knew it was his final appearance as a coach on the major junior hockey stage? Whatever it was over those 10 days in Quebec City, Lambert was a rock star with the media and won over a lot of hockey people in that short week in province de Quebec.
For the first time ever, the Kelowna Rockets franchise will have three different head coaches in three consecutive seasons. Ryan Huska was at the helm in 2013-2014. Lambert guided the ship in 2014-2015 and the new hire _________ will patrol the bench for the start of the 2015-2016 campaign.
It is hard to imagine that the next bench boss will have the same 'people skills' and 'media savy' that Lambert exhibited. In fact, I can guarantee he won't.
I for one will deeply miss not only a quality coach, but in this case a friend.
Best of luck Lambo in the new adventure that awaits you and your family.
You will be, as the French say, spectaculaire!