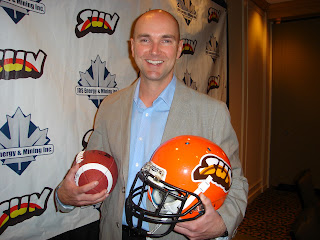 The Okanagan Sun's new head coach was introduced to the media Tuesday morning.
Thirty-nine year-old Gavin Lake becomes the 13th coach in Okanagan Sun history.  Lake
joins the team after Jason Casey stepped down last month to take a job at Queen's University.
"I love the fact that this organization is committed to winning. They are looking outside the box. They have recognized what they have done over the last couple of years hasnt perhaps yielded the ultimate prize. It has been to long. It has been over 12 years, so it is time to get back to national promenience."
The native of Newmarket, Ontario most recently coached in Europe in the Austrian second division.
on April 17, 2012 No comments:

Brown has no choice but to root for Canucks 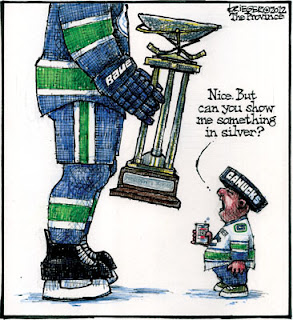 
The Kelowna Rockets goaltender has no other choice.

Brown's father, Newell, is an assistant coach for the most hated team in the National Hockey League.

Brown says he will be cheering on his dad and the Canucks in their quest for a Stanley Cup.

"It is not just another team playing out there. Obviously a family member wants to win and the kind of living he is making is dependant on the team winning or losing. It is a little more stressful but it also a little more fun too".

Without hesitation he says it is Alex Burrows because he is one of the hardest workers on the ice.
on April 13, 2012 No comments: 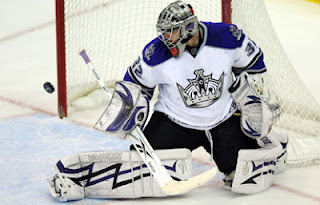 If the Los Angeles Kings upset the Vancouver Canucks in the opening round of the NHL playoffs, it will have to do with the play of goaltender Jonathan Quick.

Quick is arguably one of the best young goaltenders in the game and should be considered for the Vezina Trophy.

Quick is no stranger to Kelowna resident Kim Dillabaugh.

Dillabaugh worked with Quick in the minors for over two years as a goaltending consulting with the Kings before the 26 year-old starred at the NHL level.

"He has put a lot of time and effort and has worked at his game for a lot of years to give himself an opportunity. The big thing for him (Quick) is his main concern is to win hockey games and win a Stanley Cup."

Dillabaugh says Quick's competitive nature and cool demeanor have served him well in developing into one of the premiere goaltenders in the NHL.

"He is the ultimate competitor in terms of keeping pucks out of the net whether it is in practice or a skate around.  He is not an individual that likes pucks to go by him"

Dillabaugh splits his duties as a goaltender coach with the LA Kings and the WHL's Kelowna Rockets.
on April 10, 2012 No comments:

Brett Bulmer will be in the Houston Aeros line up this weekend as the American Hockey League team pushes for a playoff spot.

Bulmer was assigned to the Aeros by the Minnesota Wild after his season came to an end with the Kelowna Rockets.

Aeros General Manager Jim Mill says Bulmer will be a welcome addition to his team.

Bulmer spent the playoffs with the Aeros last season, playing in eight games.

"Brett's success in the NHL and the American Hockey League will be dictated by what he does. This kid is a great prospect and he has a bright future ahead of him", Mill added.

Hamilton and Huska speak on AM 1150