Can The WHL Three-Peat?

Haber/McLellan and a Cute Kyle Beach

I Need To Rant, And It Ain't Hockey Related 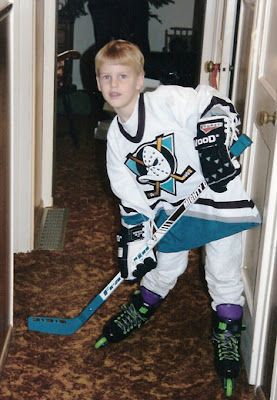 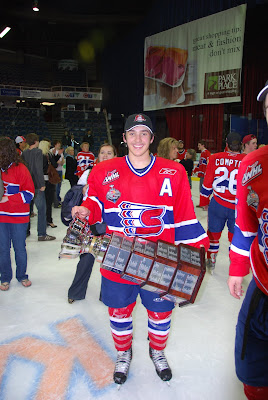 A great pic of Spokane Chiefs defenseman Jared Spurgeon in Lethbridge with the WHL championship trophy in hand. The younger brother of former Kelowna Rockets forward Tyler Spurgeon is set for the Chiefs first game of the tournament, Saturday against Belleville. Jared will have his mom Debi in attendance to cheer him on.

The Boston Bruins have re-signed forward Chuck Kobasew to a multi-year contract extension Tuesday. Terms of the deal were not disclosed.

Kobasew, a native of Osoyoos, B.C., had a career year for Boston in the regular season with 22 goals, 17 assists and 39 points. 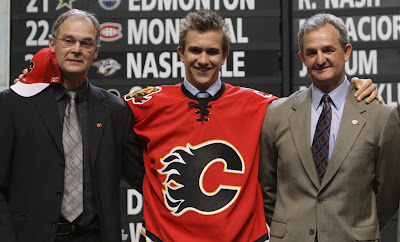 Is Mikael Backlund a step closer to joining the Kelowna Rockets? The Calgary Flames signed the first-rounder today to a contract.
It's been suggested that once Backlund signed with the Flames, GM Darryl Sutter would like to see the prospect play a season in North America, likely in the WHL, where the Rockets hold his junior playing rights.
Sutter said earlier this season he had no problem with the idea of Backlund remaining in Sweden, yet a few months later said he would like to see Backlund in the WHL.
Warren Henderson in the Capital News spoke to Rockets GM Bruce Hamilton about a month ago about landing Backlund. “I think the Flames intend is to get him over here for a year to ride the buses and play some hockey in North America to get him ready. If he doesn’t make the Flames, I would hope to see him with us. He’s a dynamic player.”
Backlund was selected with the 24th overall pick of the 2007 NHL entry draft.

This is what Hamilton told AM 1150 when we spoke last June after the Rockets selected Backlund in the CHL European draft.
"It's a flyer. Knowing Darryl (Sutter), I know he wants him to have some North American culture before he's ready to play for their organization, so whether he's here this year or next year, that's why we took the chance on this. I have given up our first round pick in next year's draft to get this pick, so it makes sense if he is here next year. Is it a risk? You bet it's a risk."
If Backlund does play in the WHL, this so called 'risk' will make the Rockets GM look like a genius.
on May 02, 2008 No comments:

Interview With Shane McColgan and his Coach 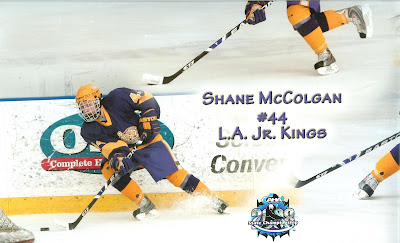 Note: Special thanks to Helen Alex, the mother of former Kamloops Blazers d-man/forward Ray Macias for providing me with a picture for the blog of McColgan and the contact numbers for both party's involved in this piece.

Here is my conversation with Shane McColgan on being drafted by the Rockets:

"Obviously it's exciting to be drafted by the Rockets. It was a team I wanted to go to. It's an honor and I'm excited."

Were you aware that the Rockets were interested in drafting you?

"I met with them (Rockets) down in Anaheim when they came down for the prospects camp. I met with them for about 2 and a half hours. I met with the GM and the coach. I gave them that feeling that I am interesting in coming up to the WHL, and that's why they drafted me.

Am I putting you on the spot by asking you if you are coming to the WHL, not going the U.S college route down the road:

"No you are not putting me on the spot. I think I am coming to the WHL in the next year or so. Obviously I have a lot of options, but I think the fastest way to get to the NHL is through the WHL, so I think that's a good route for me to take."

What do you need to work on before wearing Kelowna Rockets colours?

"I think I have the strength, but you can always improved on your strength and quickness and things like that. I think I need to work on the mental side of my game. I'm a competitive guy and my emotions sometimes get to me, so those are some things I need to work on."

"As much attention as he's gotten, Shane was fully aware of the WHL bantam draft and what was taking place there. "

He is definitely a player that somebody was going to take in the first round. He is probably very, very happy knowing that Colin Long and a team he is familiar with drafted him today."


What kind of player is he?

"He's very, very driven. He has speed, he can score and he's aggressive. I haven't seen a guy play with that much intensity since Wendel Clark, a former teammate of mine in Saskatoon."

Do you sense he is leaning towards to the WHL?

"I feel the WHL is the best junior hockey league in North America. For kids that go there, that's what I feel, and I think Shane knows that a lot of players have gone there and have done very well. I know for a fact he was very interested in being drafted by Kelowna and I can't see why it wouldn't happen."

Top 10 Interviews From This Past Season

1) Mark Messier. When the Rockets acquired the playing rights to Lyon Messier, you had to know that the 'Moose' would show up at sometime during the season. It become abundantly clear though that Lyons time with the Rockets would be short lived, so when I saw Messier at a morning skate in Everett, I seized the chance to chat with the NHL legend. I'll admit I was intimidated when I walked up to him as he was sitting in the stands. Yet after about two minutes of small talk, Messier showed me he is a class act, and didn't give me the feeling I was wasting his time. The ten minute interview (I could have gone on for 20 minutes) was a treat that this radio broadcaster will never forget.
2) Karl Alzner. The Hitmen made just one stop in Kelowna this past season, and Alzner was the target for a pre-game interview. On the advise of Luke Schenn, who spoke fondly of Alzner as a teammate with Team Canada, Alzner is mature beyond his years. He's such a pro, and spoke confidently about his World Junior experiences and his love for the game. I didn't get cliches, and left the interview with a better appreciation for a player who's as good on the ice as he is in front of a microphone.
3) Brady Leavold. If you haven't got it yet, I liked Leavold when he came over from Swift Current. He was a player you wanted to cheer for because of his off ice struggles with the Broncos. Whether all or some of the stories were true, he proved to be a great example to the younger players and was a pleasure to chat with during an interview. Leavold is outspoken and does his best to express himself without going over the line and being completely honest. Honestly can get you into trouble, yet Leavold did his best to get as close to the line as possible without going over it. In my opinion he's one of the best Rocket interviews ever in my time in Kelowna.
4) Tomas Hickey: While I was impressed with his play for the T-Birds in the opening round series with the Rockets, a chat I had with him before game three had be waving my pomp pomp's for the articulate d-man. Hickey even knew my name when we shook hands in our first encounter. The fact he knows who the peon opposition broadcaster is, is awfully impressive.
5) Kelly McCrimmon. He's a smart hockey man, and during an interview I had with him late in the season McCrimmon was candid and brutally honest when we spoke about Brayden Schenn. It was well documented last summer that Brayden and the Wheat Kings were at odds, and now that things had settled, both McCrimmon and the sensational rookie were speaking the same language. I respect McCrimmon a straight shooter who rarely makes a bad player move.
6) Rocky Thompson: The Edmonton Oil Kings assistant coach was a joy to talk to in a pre-game interview. He is so well spoken, brutally honest, and loves to gab about his playing days. He was on my top 10 list of interviews as a player when he was with Medicine Hat and Swift Current, and didn't disappoint in the 8 minute conversation I had with him now as a coach.
7) Bruce Hamilton. Hamilton has always been outspoken, and never pulls any punches when asked a question. In fact over my time with the Rockets, he has never backed away from a question I've asked him. Hamilton is open to share inside information with me on players on his roster, with the knowledge I won't be sharing that with fellow colleagues. What more can I ask for as the teams broadcaster?
8) Josiah Anderson. This one may come out of left field, but the former Rockets love for life and joy of playing the game of hockey in Europe this past season made for an excellent interview. Anderson was so pleased that he was fortunate enough to land with a team overseas, you could hear it in his voice. It's not often I get a chance to speak with former Rockets alumni over the course of the hockey season, but my long distance chat with the likable Anderson was well worth the service charge.
9) Ryan Huska. As the season wore on I got an even getter appreciation for the soft spoken coach. Huska wouldn't shy away when asked about his teams struggles, and unlike some coaches, called out players while praising others when it was deemed appropriate.
10) Don Hay. The Giants head coach reveals something new about the game every time I chat with him.
on May 01, 2008 No comments: