Tonight’s Preview: The Kelowna Rockets play their 38thgame of the season tonight against the visiting Prince George Cougars. This is the 6th of 8 meetings between the two teams’. The road team has won every game in the seasonal series. The Rockets are 4-1-0-0 against the Cougars in the first five games, having out-scored their BC Division rivals 30-15. The Cougars are one of only three teams to beat the Rockets on home ice this season. Back on December 5th the Cougars earned a 4-3 win. Ty Edmonds was named the games’ first star with a 37 save performance as the Rockets peppered the Cougars net with 16-third period shots in the one goal loss. Nick Merkley, Rourke Chartier and Justin Kirkland scored in a losing cause. Following tonight’s game, these two teams meet again at Prospera Place on January 3rd and February 9th to conclude the seasonal series. The Rockets have won three straight games after a 4-2 win Saturday night over the Kamloops Blazers. Rourke Chartier scored twice.Following tonight’s tilt, the Rockets are in Kamloops Friday before again hosting the Cougars Saturday night. This is the second game of six straight for the Rockets against teams in the BC Division. After playing 11 of their last 17on the road, the Rockets are in the midst of playing 9 of 11 games on home ice. Overall, the Rockets have a record of9-4-2-0 in their last 15 games with points in 11 of those 15.

Merkley vs. Harkins: Tonight’s game features two of the top scoring 17 year-old draft eligible players in the WHL. Nick Merkley leads the Rockets in scoring with 10+46=56 while Jansen Harkins leads the Cougars in scoring with 12+27=39. Harkins was taken 2nd overall in the 2012 WHL bantam draft while Merkley was chosen 9th overall. Both Merkley and Harkins will represent the WHL at the Top Prospects game next month in Ontario. The two are teammates on Team Orr.

This and That: Did you know the Rockets played their 1400th regular season game as the ‘Kelowna Rockets’December 10th in Lethbridge?...The Rockets are gunning for their 30th win of the season. It would mark the 14th time in the last 15 seasons the franchise has achieved that mark. The only blemish over that stretch was a 22 win season in 2006-2007, the only time they have failed to make the playoffs….This is the final game for the month of December. The Rockets are 6-2-0-0 in eight games during the month. Last season the Rockets were 12-0-0-0 in December with 5 straight wins on home ice and 7 straight victories on the road….The Rockets are 36-7-1-1 in the last two seasons against teams in the BC Division…Have the Kelowna Rockets ever won back-to-back regular season titles? Yes, but it has happened only once. In 2002-2003, the team collected 109 points and followed that up with a 98 point season in 2003-2004…Nick Merkley will represent the WHL at the Top Prospects game next month in St. Catharine’s Ontario….Twenty of the Rockets final 35games will play played against teams in the BC Division….The team has only two more trips to the U.S. The Rockets are in Seattle February 10th and in Everett on March 3rd…Tyson Baillie is two goals shy of his career high 26 he scored in the 2012-2013 season…Cole Martin leads the WHL with a +30 rating. Martin is now a +93 in the last two seasons…The Rockets have been held to three goals or less only 9 times this season…The Rockets have not been shut-out in 113 consecutive games. The last time the Rockets were held without a goal was March 3, 2013 in a 3-0 loss in Kamloops…Josh Morrissey, Madison Bowey and Kris Schmidli are all participating at the World Junior Hockey Championships in Montreal/Toronto…Is fighting down in the WHL? Tyrell Goulbourne has 3 fighting majors this season. The 20 year-old had 19 in 2012-2013. Rodney Southam has 8 fighting majors this season while Riley Stadel has five. Stadel had eight tilts a season ago…Cole Martin is playing in career game #246 tonight vs. Cougars.

Who’s Hot: Cole Martin has 7 assists in his last five games…Rodney Southam has 3+2=5 in his last 6games…Justin Kirkland is riding a five game point streak. Kirkland has 3+6=9 over that stretch. Kirkland had a 6 game point streak in early October…Dillon Dube has 7goals in his last 9 games…Tyson Baillie has 11 goals in his last 16 games and has points in 13 of his last 19…Over that period, the 19 year-old has (13+7=20)...Rourke Chartier has ten more goals (34) than he had all of last season. Chartier has goals in 17 of his last 20games….Nick Merkley has 6+24=30 in his last 21games…Lucas Johansen has 4 assists in his last three games. That is more than the three assists (points) he earned in his first 34 games.
on December 30, 2014 3 comments: 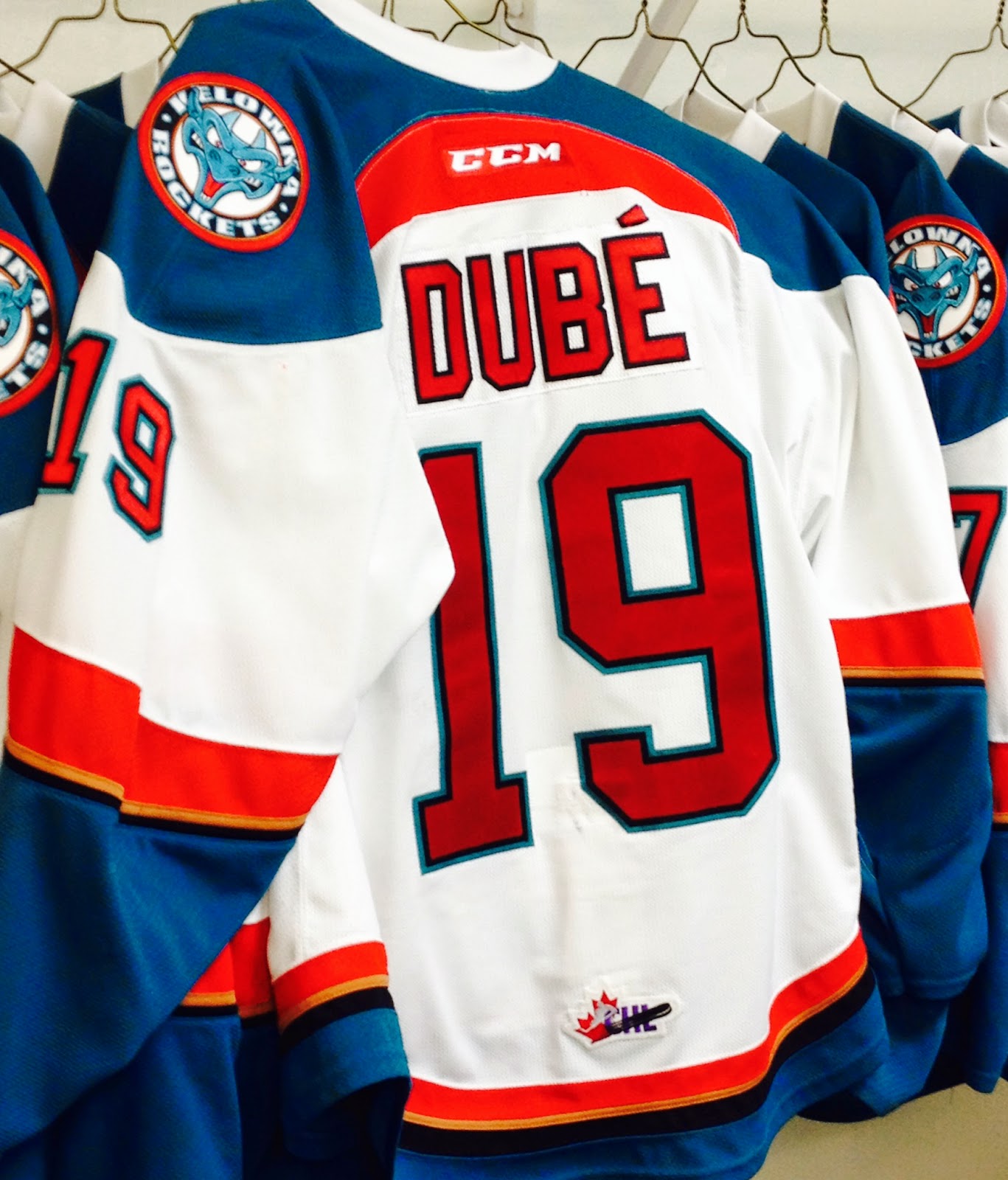 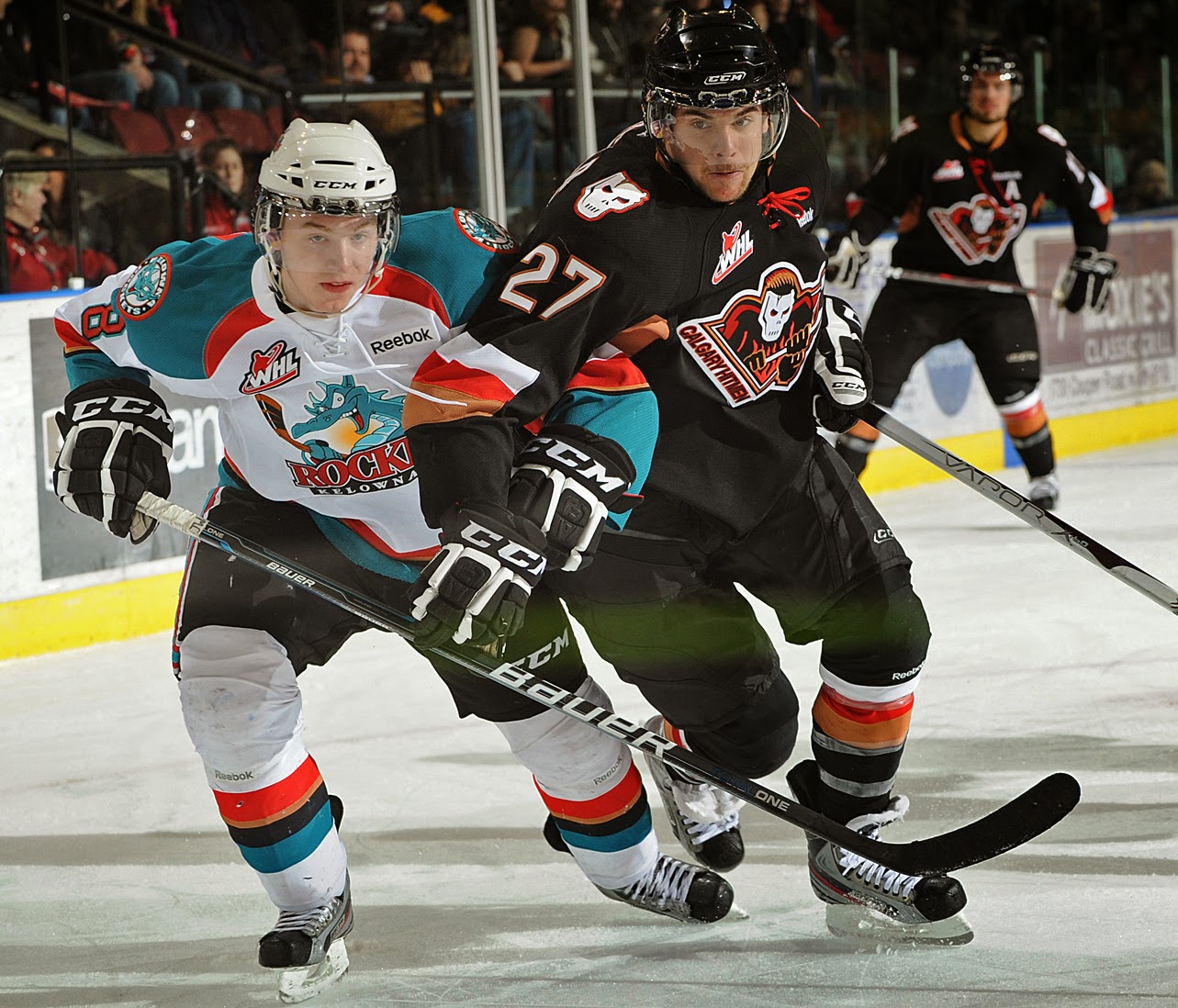 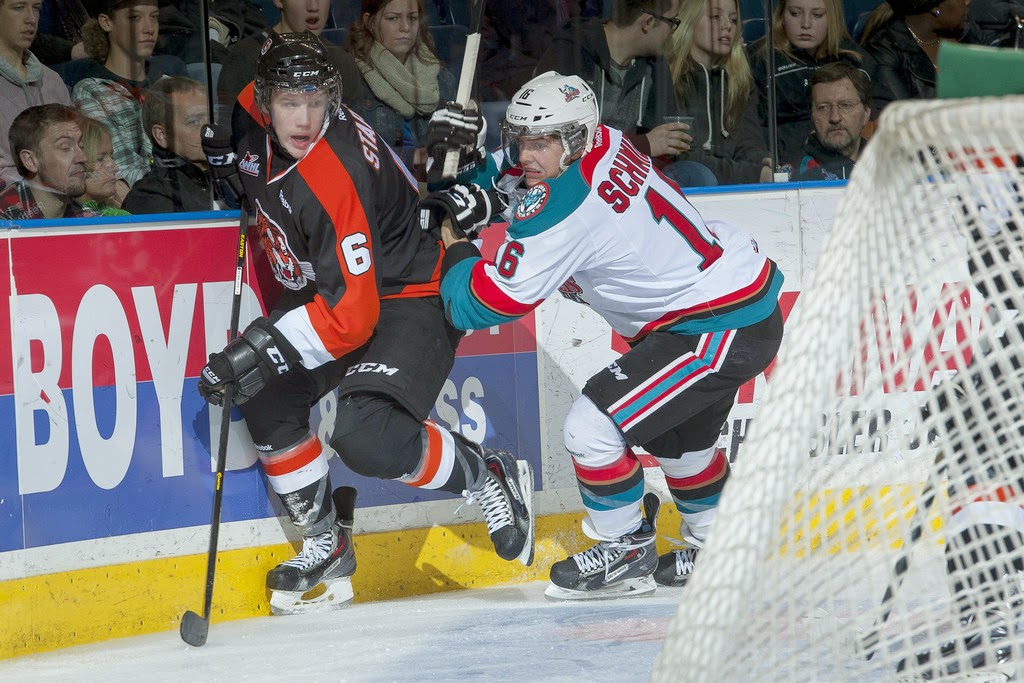 
Tonight’s Preview: The Kelowna Rockets play game two of a five game Alberta road trip tonight against the Medicine Hat Tigers. The Rockets are playing five games in eight nights’ which includes stops in Calgary (Sunday), Edmonton (December 16th) and Red Deer (December 17th). The team only plays back-to-back games once on this road trip with stops in Edmonton and then a night later against the Rebels. On Wednesday night, Dillon Dube scored twice and added an assist in a 4-3 shootout win over the Lethbridge Hurricanes. Nick Merkley scored the game winning goal in the shootout. Rodney Southam added his second goal in a Rockets uniform in the teams’ 25th win of the season. This is the first of two meetings between the Rockets and Tigers this season. They meet again in Kelowna on January 10th – trade deadline day in the WHL. Last season the Rockets were 2-0-0-0 with a 5-4 victory and a 4-3 win. Overall, the Rockets have a record of 5-3-2-0 in their last 10 games. The Rockets return home after the Christmas break to host the Kamloops Blazers on December 27th.

Blockbuster Deal: The Kelowna Rockets pulled off a four player deal with the Prince Albert Raiders Wednesday night. The Rockets acquired 19 year-old Josh Morrissey and 19 year-old Gage Quinney from the Raiders for 19 year-old Jesse Lees, 18 year-old Austin Glover and a 2nd and 3rd round draft pick. Morrissey is attempting to make Canada’s entry at the World Junior Hockey Championships while Quinney is making his debut tonight with his new team after playing Tuesday night in Vancouver with the Raiders.

Digging Deeper: Josh Morrissey is a first round pick of the NHL’s Winnipeg Jets. Morrissey was an Eastern Conference 1st team all-star last season, recording 28 goals on the Raiders blue line. Morrissey is also the older brother of Rockets rookie goaltender Jake Morrissey. Gage Quinney was born in Las Vegas Nevada when his father Ken (born in Quesnel BC) was playing down there for the Las Vegas Thunder of the defunct International Hockey League. Quinney’s father was a 10th round NHL pick of the Quebec Nordiques and is a former teammate of Rockets head coach Dan Lambert. Gage’s brother Landon is listed by the Moose Jaw Warriors.

This and That: Gage Quinney’s dad Ken played four seasons with the WHL’s Calgary Wranglers…Quinney’s mother is from Nova Scotia…Nick Merkley is playing in his 100th career game tonight in Medicine Hat…The Rockets have had 12 players play for Canada at World Junior Hockey Championship. Tyler Myers, Luke Schenn (twice), Tyson Barrie, Shea Weber, Josh Gorges, Brandon McMillan, Blake Comeau, Chuck Kobasew, Brett McLean, Jamie Benn and Robb Gordon.…Rourke Chartier was named the WHL Player of the month for November…Nick Merkley is rated 22nd by the International Scouting Service for this June’s NHL draft….The Rockets have been held to three goals or less only 8 times this season…The Rockets are rated as the second best team in Canada according to the CHL Top 10 junior rankings…Nick Merkley has 16 multiple point games….Rourke Chartier and Nick Merkley have been held off the score-sheet five times this season…In case you are wondering, the Rockets have not been shut-out in 107 consecutive games. The last time the Rockets were held without a goal was March 3, 2013 in a 3-0 loss in Kamloops.
Who’s Hot: Tyson Baillie has six goals in his last 12 games and has points in 9 of his last 15…Over that period, the 19 year-old has (8+7=15)...Rourke Chartier has eight more goals (32) than he had all of last season. Chartier has goals in 16 of his last 19 games….Nick Merkley has 6+20=26 in his last 17 games…Madison Bowey has 93 points in his last 100 regular season games.