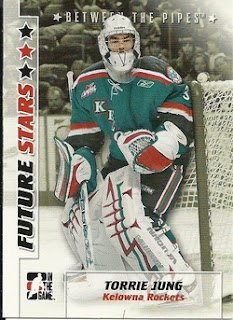 A former goaltender with the Kelowna Rockets finds himself four wins away from a pro hockey championship.
Torrie Jung, who wore a Kelowna Rockets uniform for two seasons from 2006 to 2008 before being traded to the Edmonton Oil Kings, is now playing for the Central Hockey League's Wichita Thunder.
The Thunder, with Jung as the starter, is 8 and 0 in the CHL playoffs heading into the league final Friday against either the Allan Americans or the Missouri Mavericks.
Game seven in the Americans/Mavericks series goes Tuesday night.
Jung's team advanced to the league finals after a series sweep of the Fort Worth Brahmas. The Brahmas starting goaltender was Kristofer Westblom.
Westblom played four seasons with the Kelowna Rockets from 2004 to 2008.
on April 23, 2013 No comments:

Spurgeon has European title to go along with Memorial Cup 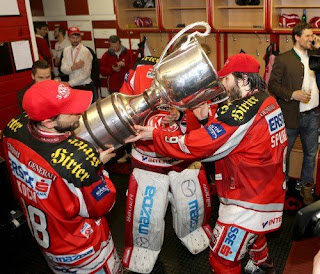 Tyler Spurgeon is a winner.

The 27 year-old won a Memorial Cup championship with the Kelowna Rockets in 2004 and now has added a pro championship to his trophy case.

"It was their 30th championship that we ended up winning there. It was pretty exciting time for everyone in the city. They had been waiting, the past couple of years considering we had made it to the finals and we didn't win so everyone was pushing that we would get that thirtieth one".

Spurgeon has played three season in Klagenfurt and admits it does resemble Kelowna in a lot of ways.

"One thing that is similar between the two was the fan support we had. It is funny because the two cities are on huge lakes and summer towns with mountains. I really feel at home there in Austria."

Spurgeon even had a chance to play with Buffalo Sabres defenceman Tyler Myers earlier this season when the former Rockets defenceman elected to play overseas for Klagenfurt during the NHL lockout.
on April 18, 2013 No comments:

You need a little hockey luck to win a championship

Let's face it; you need a little luck or good fortune along the way to win a WHL championship. Oh sure, good goaltending, timely scoring and character players need to emerge to win the Ed Chynoweth Cup, but if the 'Hockey God's' aren't looking upon you favorably you are severely hooped.
Use the Kelowna Rockets as an example. In the 2013 playoffs, the Rockets suffered far too many obstacles in order to obtain the ultimate prize. The injury to captain Colton Sissons in the second last game of the regular season was a back breaker. Many fans wondered why it had to happen late in the season and why to the teams’ heart and soul player? And why was the injury so significant? Why did Carter Rigby and Mitch Wheaton have to suffer shoulder injuries that were so serious, neither could play in the first round of the playoffs? Why did MacKenzie Johnston get knocked out of the opening round playoff series with Seattle before Jesse Lees suffered a similar fate in game four? It forced the Rocket to use just five d-men to get past the T-Birds in a series that should have never gone seven games. It ended up taxing both the forwards and d-man and left them anything put fresh for a second round date with the Kamloops Blazers.
In round two against Kamloops, why did the officiating staff stick it to the Rockets in game four? Why did the team have to compete against more than just a Blazers team who needed no help in generating quality chances even strength? No breaks from the officiating staff and the injury bug biting mercilessly translated into a quick exit from the playoffs and no championship title.
Good fortune was a factor in a WHL title in 2005 though. The Rockets found themselves in the Western Conference final against the high powered Kootenay Ice. In game six at Prospera Place, Ice goaltender Jeff Glass was putting on a clinic. With Kootenay holding a slim 1-0 lead late in the third period and game seven looking like a sure thing back in Cranbrook, the Rockets were granted a power play late in the game. Defenceman Mike Card would take the puck behind the Rockets net and skated with it up the ice. Instead of dumping the puck in the corner, Card surprised Glass by firing a long range shot from center ice that somehow beat the 19 year-old goaltender, tying the game at one. In overtime the Rockets would score the game winning goal. On to the finals they went where they captured the league title with a rather easy five game series with the Brandon Wheat Kings. But why did Mike Card's shot from centre ice beat Glass, who was indestructible through 56 minute?
Fast forward to 2009 when the Rockets faced power house Calgary in the league final. In game six, the Rockets are awarded a power play in overtime after Alex Plante takes a hooking penalty. Tyson Barrie goes on to score the game winning goal sending the Rockets to the Memorial Cup for the fourth time in franchise history. But why was a penalty called on Plante in overtime? Was it good fortune that played a factor in one official calling a penalty in O.T? Had Calgary won that game the series would have gone back to the Saddledome for a game seven where the Hitmen would have been the odds on favorite to wrap up the series.
Again, good goaltending, timely scoring and character players need to emerge in order to have a long playoff run into the month of May. But if you don't think a little luck or good fortune along the way isn't necessary in winning a league title and representing the WHL at the Memorial Cup, you are fooling yourself.

The straw that stirred the Kelowna Rockets drink

Colton Sissons is a rare breed. He can shoot, skate and score. Sissons can lead in the dressing room and will fight when provoked. That may explain why he was named the MVP of the Kelowna Rockets. He could do it all. Is he the best Rockets captain ever considering he could do so many things so well? There is no debating he was the straw that stirred the Kelowna Rockets drink.
on April 13, 2013 No comments:

Here is Jordon Cooke reflecting on the ups and downs of being a #1 goaltender, not only during the regular season, but the playoffs.
on April 12, 2013 No comments: 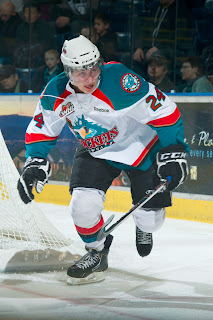 How crazy was last night's game? Within 30 seconds we witnessed two breakaways, one for each team. Blazers forward Brendan Ranford was stoned at one end and Rockets forward  Zach Franko was denied at the other.
on April 08, 2013 No comments:

Down but not out 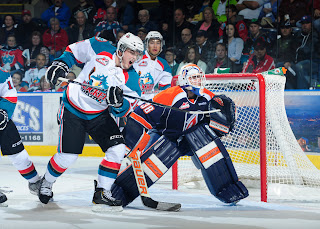