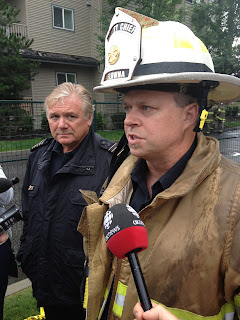 Investigators says the Legacy Apartment fire in Rutland was caused by a barbecue.

Assistant Fire Chief Lou Wilde (pictured) says the fire started on the second floor and made its way to the roof of the 52 unit complex.

"The fire originated on the second floor deck. The damage that is up there leads us to believe it was either human error or part of the barbecue that was faulty."

Wilde says the fire quickly made its way to the roof.

"There is very little damage in the hallways on the second and third floor. The walls are still white. That leads us to conclude that the fire went up the outside of the building and burned the roof off it."

Fire Chief Jeff Carlisle says their is a silver lining a day after the blaze.

"I believe one or two cats are missing but all things considered, and I get the loss that people have on the fourth floor and the other suites, but no one is injured and ev

Sixty-nine residents from 39 units have registered with Emergency Support Services.

The registration centre is located at the Salvation Army on Sutherland Avenue. 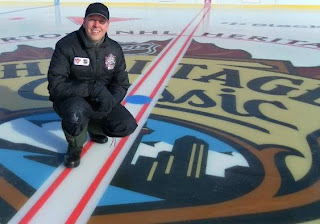 Kelowna resident Wayne Pansegrau (pictured right) will have a front row seat to all the action when the Vancouver Canucks host the Ottawa Senators next March at BC Place Stadium.

Pansegrau has been asked to be a member of the ice making crew after holding a similar post at the Heritage Classic in Calgary in 2011.


"Working here with the Kelowna Rockets is a pretty big stage. We have had a lot of big events here like the World Juniors and the Memorial Cup but working a few games in the NHL would be spectacular."

Pansegrau was also a Zamboni driver at the 2010 Winter Olympics in Vancouver.
on July 11, 2013 No comments: