Three Dog Night penned the hit song, 'One is the Loneliest Number'.
Kelowna Rockets Head Coach Jason Smith would disagree.
Smith earned his first WHL coaching victory Saturday night when his team went out and scored a 5-1 home ice win over the Kamloops Blazers. It was a stark contrast to his WHL coaching debut Friday night in Kamloops, where he watched his team crumble in a 9-2 road loss.
"It's exciting. It is nice to bounce back from last night. The guys played a much more complete game out there. They did a lot of the little things we have been talking about over the last couple of weeks, with pressuring the puck, skating and making smart, simple plays and obviously getting the puck to the net."
How did the players treat their new head coach to his first of what will hopefully be many wins behind the Rockets bench this season?
"In the room, I always go in and say something after the game. The guys had the puck. They scooped it up off the ice after the game and presented it to me. It was a great moment. It is something I will remember for a long time", Smith added. 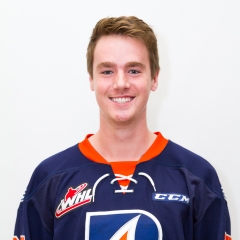 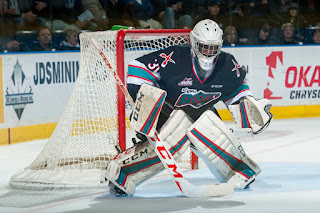 Tonight’s Preview: This is the first of ten meetings between the Rockets and Blazers this season. If you want to throw pre-season games into the mix, these two BC rivals will have played each other 13 times before the regular season ends. Did I mention they last faced one another in an epic seven game opening round playoff series in the 2016 post season? The Rockets won that affair 4 games to 3 with four of the games being decided by a single goal. Last season, the Rockets were 5-2-1-0 in eight regular season meetings against Kamloops, but 7 of those 8 games were again decided by one goal. The Rockets are 29-11-4-0 in the last five seasons against Kamloops including winning 16 of their last 20 regular season games at Prospera Place. Last season the Rockets opened the regular season against Kamloops, winning opening night (4-3) before earning a victory (7-3) a night later in Kamloops. These two teams meet tomorrow night in Kelowna to wrap up a weekend home and home series. The Rockets play 6 of their first 8 games on the road including two games in Prince George next weekend (September 30/October 1st).

What the heck happened? Last season, the Rockets won 48 games and finished this season with 100 points. Only Victoria (106) and Brandon (102) had more points than the Rockets last season. The Rockets scored the 4th most goals in the WHL (269) while allowing the 6th fewest (218). The team advanced all the way to the Western Conference final for a third consecutive season after playoff series wins over Kamloops (7 games) and Victoria (7 games). The team was eliminated by the Seattle Thunderbirds (four straight games) in the Western Conference final. In each of the last two seasons, the Rockets season has ended in overtime. Tyson Baillie led the team in scoring last season with 95 points and was named a 1st team Western Conference all-star. In 2015-16, the Rockets longest winning streak reached five games (twice) with its longest losing streak being two games (four times). The club played in 28-one goal games last season.

Gator-aide: The Kelowna Rockets made a head coaching change at seasons end. After just one year on the job, Brad Ralph parted ways with the team on May 9th. Then on July 6th, Jason Smith was hired as Brad Ralph’s replacement. Smith is the Rockets fourth coach in the last four years. Smith, who retired September 2, 2009, played 16 seasons in the NHL before joining the coaching staff of the NHL’s Ottawa Senators, a role Smith has held for the last four seasons’. Smith won a gold medal for Canada at the World Junior Hockey Championships in 1993 and was named the WHL Defenceman of the Year that same season.

Winds of Change: The Kelowna Rockets have lost three of their top four scorers from last season. Tyson Baillie (95 pts.), Justin Kirkland (67 pts.) and Cole Linaker (50 pts.) are no longer with the team. There is an outside chance Kirkland could return if he fails to stick with Nashville’s AHL affiliate. Goaltender Jackson Whistle also graduated. Joe Gatenby was traded to Kamloops for Jake Kryski on August 18th. The Rockets return 19 players from last season’s team. The only other change saw Adam Brown join the team as a part time coach. Brown owns the Kelowna Rockets franchise record for games played (200) and saves made (5,079).


TSN prospect analyst Craig Button has released his list of the top 30 players eligible for next June's NHL draft in Chicago.

The 17 year-old (won't turn 18 until December 13th) admits he has heard the pre-draft hype and the possibility of following in his fathers footsteps.

It can't be easy playing in the shadows of his famous hockey father, Adam, who played 18 seasons in the NHL. Adam Foote is considered one of the best shutdown defenceman during a career that saw him play with the Quebec Nordiques, Colorado Avalanche and Columbus Blue Jackets. Adam Foote was a second round selection of the Nordiques, 22nd overall, in the 1989 entry draft.

The elder Foote says he doesn't want to get in Cal's way of achieving his goal of eventually playing in the NHL.

While Cal is projected to be a high pick in next summer's draft, younger brother Nolan, 16, will be making his Western Hockey League debut this season.

Adam will have the pleasure of watching both sons closely, with the plan of building a home in Kelowna and having both Cal and Nolan under the same roof, the same way the two boys grew up while being raised in Denver, Colorado.

"I knew they (Rockets) were a real good organization, but when I really looked into it, I didn't know they had these many banners. I was aware of the defenceman that they have developed. I got to coach him (Cal) for four years and now it is fun for me to let him (Cal) go and let someone else develop him and I think he needs that", Foote added.
on September 14, 2016 No comments: