Things that make me go hmm


Jordon Cooke admits he will face a significant language barrier when he starts his pro career this fall.

The former Kelowna Rockets goaltender will play in Gap, France this season.

"I am fortunate enough that there are guys that I know who have played in Gap in previous years and I have had the opportunity to reach out and contact them. But their is always uncertainty. I am going to a country where I really don't know the language".

The 25 year-old starred for the University Saskatchewan Huskies for four seasons before deciding to head over to Europe.

"I wanted a place where I can make some money for a reasonable lifestyle and enjoy myself but also play and not have to sit on the bench. I haven't sat in years now and that is what helped me make my decision on what was best for me".

Cooke succeeded on the ice and in the classroom at the U of S.

While being named the 'Canada West Goalie of the Year' on three separate occasions, he also earned a degree in economics.

"Going to Gap is a stepping stone. It is a one year deal in a location where you come into and hope to move on from there. I have been working hard here and I have found some success and I want to keep going with that".

Cooke played for the Kelowna Rockets from 2010 until 2014 and was named the CHL Goalie of the Year in his 20 year-old season of major junior hockey.
on June 07, 2018 No comments: 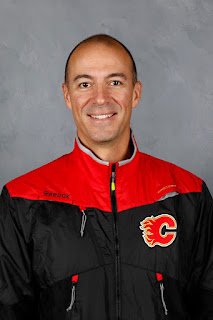 Ryan Huska says the Kelowna Rockets are a significant reason why he is now an assistant coach with
the NHL Calgary Flames.

"Bruce (Hamilton) hired me as a head coach when I had very limited experience. That was at a time when most coaches that were being hired were of the bigger names".

Huska spent five seasons as an assist before becoming head coach in the summer of 2007.

"For him (Hamilton) to put his trust and faith in me over the years in Kelowna was really the opportunity to learn to coach with his team in Kelowna, the world junior opportunity and from that point to get myself to where I am no , it all starts because he gave me the opportunity at a young age.", Huska comment.

After leaving the Rockets as the winningest coach in franchise history after 7 seasons as a head coach, the likable Huska spent four season guiding the Flames American Hockey team, which relocated from Adirondack, New York to Stockton, California in 2015.

In a results orientated business, Huska knows the pressure to win at the NHL level will be great.

"You want to bring your best to the table everyday. If you put the time in, the pressure will always be there but you can feel comfortable that what you've done is the best of your ability. The expectation now are a lot higher. The expectation now is results and that has changed from where I have been the last few years where development has been priority. It will be a different situation for sure, but one we are really excited about", Huska added.

What's next for Huska?

He and his wife Denise will be busy with a Calgary realtor finding a new place to call home.
on June 04, 2018 No comments: