It is a bitter sweet day as colleague Doyle Potenteau officially leaves the sports department at the Kelowna Daily Courier. I have known for a while now that Doyle was likely on the 'back nine' at the 2015 Memorial Cup in Quebec City and was contemplating a change. The writing was clearly on the wall. Potenteau wanted to change the direction of his journalism career which would allow him to spend more time with his family. For that alone, I applaud a man who I have developed a close relationship with over the years.
I dare say that Potenteau and I have a very unique relationship among competing media in the city of Kelowna. While he was covering the Rockets as the Courier's beat writer for print, I was trying to get the leg up on him as the radio broadcaster of the team. Our relationship wasn't built on competition though, but more on a mutual respect we had for one another's craft.
Our friendship blossomed thanks to countless days and nights spent on the road together. We were travelling companions who ending up treating each other as brothers.
My first introduction to Potenteau came in the fall of 2000 when I left the Swift Current Broncos to join the Kelowna Rockets and Potenteau arrived a few months earlier at the Kelowna Daily Courier after a stint on the lower mainland. We were both new on the scene and quickly gravitated to one another more out of support than anything else. Quickly that developed into a friendship.
We almost always roomed together on Kelowna Rockets road trips. We spent 15 seasons travelling with one another, going in and out of hotels, covering hockey games, eating at restaurants and most importantly laughing at what life threw our way. We travelled endless miles/kilometers in a radio station vehicle over those 15 years, many times in the early morning hours with very little sleep. The only thing keeping us awake, with Doyle at the wheel, was often an 80's song cranked on the radio or CD player that prompted us to break into song.
Doyle or I would take lead vocals while at others we attempted to sing in harmony.
We attended four Memorial Cups together with many a late evening in a local watering hole. We would sometimes put our life in danger by visiting an establishment that came on the recommendation of a local citizen, but we always seemed to come out unscathed.
I will always remember the time, in 2002, when Doyle and I hesitantly exited a warm Kelowna Rockets bus on a -34 degree day in Regina, with a windchill to match, and feverishly ran as quickly as our legs could carry us inside a warm restaurant. We often marvelled how we became so soft living in the warm climate of BC despite both originally growing up in Saskatchewan.
On the road, Doyle and I were pretty much inseparable.
In a media world full of egos, Potenteau doesn't carry that with him. Doyle has the right to considering he has the ability to churn out a game story with pin point accuracy, clarity and quotes in the blink of an eye. Potenteau isn't arrogant. He isn't cocky. Doyle is confident in his abilities, but cranking out story after story while covering one of the best junior teams in all of Canada will do that.
Potenteau is smart, honest, trust worthy and generous. I mention generous because more often than not, Potenteau was the first to pick up the bill at any establishment we happened to frequent. Sure, I have alligator arms, but one of Doyle's greatest attributes is his generosity. Potenteau is a giving person. He gives of himself which makes him such a valuable friend.
Seeing Doyle officially resign from the Daily Courier sports department is a sad day for me selfishly. I won't have him by my side as a wing man on those long Kelowna Rockets playoff runs we both are accustomed to enjoying.
While Potenteau and my relationship as colleagues on the Rockets beat is now over, our friendship remains as strong as ever and will remain that way. The only problem I see is finding a new singing partner that enjoys 80's music and is willing to break into song without hesitation on a long playoff road trip.
Something tells me it just won't be the same without Potenteau at my side. 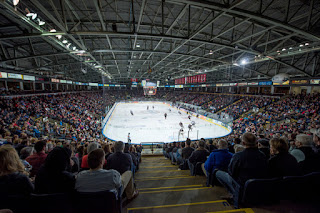 The Kelowna Rockets 2015-2016 regular season schedule was released today. The team will open defense of its Western Hockey League championship September 25th against the Kamloops Blazers. On that night, the team will raise a Western Hockey League championship banner to the rafters as well as a Western Conference championship banner. It doesn’t end there though. The Rockets will also have another BC Division banner among the three that will be hoisted high above before what is expected to be a sell out crowd.

The Rockets will open the season playing eight of their first 11 games on the road. The only three home games feature dates against Kamloops, Victoria and Red Deer.  After opening the season on home ice, the team ventures out on a six game road trip which features an Alberta road swing with games in Edmonton, Red Deer, Lethbridge and Medicine Hat. In the big picture, the Rockets play thirteen of its first 21 games on opposition ice.

The Rockets will again play a double header in Portland this season with games November 6th and 7th.

The team visits Prince George for back-to-back games on October 16th and 17th and again on February 12th and 13th.

That road trip includes a stop in Brandon in a rematch of the WHL final against the Wheat
Kings on December 12th.

The team will ring in New Years in Everett on January 1st. 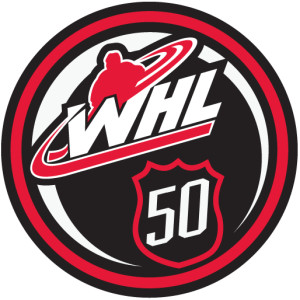 Remember that skit from Saturday Night Live? I laugh every time I see it.
Just think, the Western Hockey League is celebrating its 50th season in 2015-2016. I am happy to be invited to the 72 game celebration as a broadcaster of this great league.
For the past 20 seasons, the Western Hockey League has been a big part of my life. It has brought me employment as a broadcaster for both the Swift Current Broncos and Kelowna Rockets. It is the WHL that has allowed me access to elite players between the ages of 16 and 20. I have been able to get to know them both personally and professionally.
I have witnessed a young coach like Todd McLellan, who I spent five years with as coach/broadcaster with the Swift Current Broncos, accelerate to a solid career in the NHL. I have had the privilege of riding the bus with Marc Habscheid, Jeff Truitt, Ryan Huska and now Dan Lambert. Witnessing championships, watching players develop and mature and then move on has been rewarding.
I have travelled across Canada thanks to the Western Hockey League. Without it I wouldn't have visited Quebec City (twice), London, Ontario or Rimouski, Quebec. I would have never stepped foot at the Toyota Center in Tri City or ventured up to Prince Albert to watch a game at the Art Hauser Centre. I can guarantee, I would have never made 32 separate trips up to Prince George to watch hockey!!
In the last 20 years, thanks to the Western Hockey League, I've witnessed some of the best hockey on the planet. I've been able to see a young Shea Weber, Sergei Varlamov, Pavel Brendl, Nic Petan and Brendan Gallagher dominate before going on to pro careers. Some attain their goals of making it to the NHL, others play semi pro and many go to university, but all have been a delight to watch.
I've seen new buildings emerge in Kent, Everett, Moose Jaw and Cranbrook BC. I will have the privilege this fall of seeing the Tigers play their first season in a new facility in Medicine Hat. I've witnessed franchises reborn in Vancouver, Victoria and Edmonton and others re-locate to Chilliwack, Kent and Cranbrook.
The WHL has changed immensely since I first stepped into the broadcast booth in 1995. The biggest improvements can quickly be broken down into three areas.
1) Coaching.
2) The influx of American born players which has made the product better.
3) A decrease in fighting/intimidation and an emphasis on skill development/creativity.
In my opinion, the WHL has never looked more pro-like than it is today.
It has been an honour to be associated with the Western Hockey League.
For those that make it tick, the owners, the shareholders of small market teams and the parents that allow their sons to flourish by leaving home to play in this great league, I tip my cap for your contribution in making the Western Hockey League the greatest junior hockey league on the planet.
Raise a glass in 2015-2016 to 50 years and another prosperous 50 to come!
on June 19, 2015 No comments:

No crying over spilled milk...OK, just a little