Cooke came to play in one goal road win 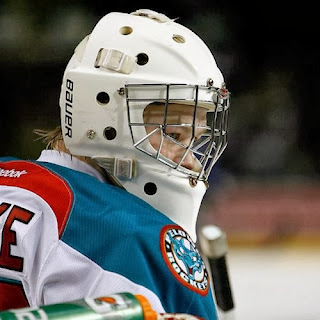 
Tonight’s Preview: The Kelowna Rockets face the Kamloops Blazers in a home and home series this weekend. The Rockets host the Blazers tomorrow night. These two teams met in a home and home series to open the regular season on September 20th and 21st with the Rockets winning both games by 5-2 scores. Since those two games, Kelowna has won 16 more times while the Blazers have lost 16 more games. Following this weekend series, the two teams meet again December 27th at Prospera Place in the first game for both following the Christmas break. The Rockets are coming off a 4-1 win in Tri City last Friday night. Overall, the team has won 6 straight games on the road, having out-scored the opposition 27-13. In four of those six road games the Rockets have allowed a single goal. Kamloops, Calgary and Saskatoon owned 8 game road winning streaks last season – the longest in the WHL. The Rockets won 7 straight road games back in the 2010-2011 campaign between February 23rd and March 18th. Overall, the team has won 10 of their last 11 games. Next week the Rockets host Vancouver Tuesday, Everett on Friday and Kootenay on Saturday December 7th.

Severson/Bowey battle Russians: Defencemen Madison Bowey and Damon Severson return to the lineup tonight after participating in both games for Team WHL at the Subway Super Series. Bowey picked up an assist in the two games against the Russians while Severson, who was named assistant captain in last night’s 4-2 WHL win, was held off the score sheet. Rockets GM Bruce Hamilton is heavily involved with Hockey Canada’s management group.

This and That: The Rockets begin a portion of their schedule where they will play 11 games before the Christmas break. Those 11 games will be played in 20 days….In the first two periods of their last two games, the Rockets have allowed a combined 19 shots on goal….The Rockets have played in five shootout games this season and are 3 and 2. All three shootout wins have come on the road in Victoria, Prince George and Seattle…Dating back to last season the Rockets are 17-3-0-0 in the month of November. This season they are 8-1-0-0 while last November they were 9-2-0-0….Three members of the Rockets have been named to NHL Central Scouting’s ‘Watch List’ of the eligible players for this summer’s NHL draft in Philadelphia. Justin Kirkland, Tyson Baillie and Riley Stadel have made that list….The Rockets are rated as the third best team in Canada according to this week’s CHL Top 10 junior rankings. Last week the Rockets were also rated third…Eighteen year-old Madison Bowey was named captain of the Kelowna Rockets November 1st….Jordon Cooke was named WHL Goaltender of the Month for September/October. Cooke was 8-0-0-2 with a goals against average of 1.85…Sixteen year-old rookie forward Nick Merkley was named the CHL and WHL Player of the Week from September 30th to October 6th. Merkley had six points in three games including back-to-back two goal games before earning two assists in a 6-3 win over the Portland Winterhawks. Merkley was the Kelowna Rockets first round pick from the 2012 WHL Bantam Draft…Assistant Coach Dan Lambert has been named the head coach for Team West for the World Under 17 Challenge in Cape Breton Nova Scotia December 28-January 5th….. Jordon Cooke is 31-4-0-2 at home in last 37 starts at home dating back to last season…Two members of the Rockets were named to Team Pacific for the upcoming Under 17 World Hockey Challenge in late December in Nova Scotia. Nick Merkley and Joe Gatenby have been added to the roster. Gatenby was the team’s second round pick in 2012…Ryan Olsen had 6 goals after 11 games last season…Olsen’s best month for scoring goals last season was in November and again in January when he struck eight times. Half of his goal total of 32 came in those two months.

Who’s Hot: Madison Bowey has 8+9=17 in his last 17 games….Ryan Olsen has 6+10=16 in his last 16 games and has points in nine of his last thirteen..Damon Severson has 2+8=10 in his last nine games…The Rockets have allowed the fewest goals while playing shorthanded in the WHL (12).


Henrik Nyberg is more mature than even I realized.
The 19 year-old surprised me and other Kelowna Rockets fans today by ending his WHL career by returning to his home in Sweden to begin a new chapter in his life. (Note: Nyberg informs me he is not quitting hockey all together)
Nyberg, even as a teenager, knew he was spinning his tires in the Western Hockey League. A diminishing role wasn’t good for him nor the team he represented for two short seasons. As an older player, Nyberg wanted to make a major contribution both on and off the ice. Nyberg didn't want to be a spare part. It takes a lot of maturity for a teenager to literally look in the mirror and see what type of hockey player they have become and come to grips that the dream of playing pro or semi pro is diminishing by the day.
Henrik Nyberg saw the light at the end of the tunnel and it didn’t include hockey, at least at a high level. I often wonder how many of his colleagues across the league, between the ages of 16 and 20, play for the wrong reasons when the desire is no longer there. How many play the game because of outside pressure from parents? How many lose the passion to play the game when outside influences from loved ones, fans and the media is so great? How many don’t want to play because in order to excel you have to lace up your skates 11 months of the year? When is the game no longer fun, which was the main reason they joined hockey in the first place?
'Hank', as his teammates called him, was bold enough to take action on none, some or all of these feelings. Sadly, others like him won't and instead play with no real purpose. Is it exciting to come to the rink everyday to practice? Is it fun being around your teammates or is it a drag? Would I rather be hanging out with my girlfriend and doing what normal teenagers do rather than bus around Western Canada in the wee hours of the morning? Few are scared to ask themselves those question with the fear of finding out the real answer.
Whatever Henrik Nyberg’s real motivation was for leaving the Rockets now, I applaud the move.
‘Hank the Tank’ isn’t running out on his teammates. In my opinion, Nyberg is being the ultimate teammate. He isn’t going through the motions in practice or in games when his heart isn’t into it. He didn’t want to hold anyone back, specifically the other 22 players in the dressing room. Nyberg should be celebrated for a mature decision to leave the team and move on with his life. In the big picture, Nyberg is better for it and so are his teammates who will undoubtedly miss his bright smile.
Thanks 'Hank' for what you did in your short stay in Kelowna and for making the bold decision by following your heart.
Henrik Nyberg didn't score many goals but this was my favourite in typical 'Hank the Tank' fashion.

Rockets lose for only third time