The Kelowna Rockets have added a familiar face to it's coaching staff.

Twenty four year-old Adam Brown will be the teams 'eye in the sky' in the press box at home games this season and will help out with the goaltenders.

Brown played four seasons with the Rockets from 2008 until 2012 before eventually turning pro.

Now the Yorba Linda, California resident is back with his old junior team.

"It is a bit different seeing the game from the the other side.  You understand what the coaches were thinking a bit more than when we were playing. It is a really good opportunity. I am excited to be here and work with a high level team."

"The passion and love for the game wasn't as high as it used to be. When you are doing something like playing a sport, if the passion and the love isn't there you might as well move on to something that is a little more long term", Brown added.

Roster spots still up for grabs

Questions to be answered as main camp opens 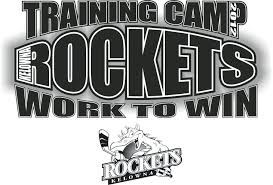 Rookie d-man is the real deal

When Gage Quinney was traded to the Kamloops Blazers last October by the Kelowna Rockets for a third round bantam pick, it marked the first time in recent memory that these two arch WHL rivals were able to agree on a player swap.

No bickering? No hatred? No turmoil? Nope.

Fast forward just shy of 10 months later and the two sides are at it again.

The Rockets have acquired 18 year-old Jake Kryski from the Blazers for 19 year-old defenceman Joe Gatenby and his younger brother Danny. Gatenby was named the Rockets top defenceman last season and had a team best +31.

Kryski is entering his third season in the WHL after scoring 12 goals and collecting 39 points in 67 games last season. Originally a first round WHL bantam pick of the Prince Albert Raiders, Kryski was traded to the Blazers in a July 10/2013 deal that saw goaltender Cole Cheveldave and a 4th round bantam pick go to the Raiders.

Before playing in the WHL, Kryski played midget hockey with the Okanagan Rockets.
Highly touted in bantam, the 1998 born Kryski scored 59 goals in bantam hockey with the Burnaby Winter Club.
on August 18, 2016 No comments: