Kyle Crosbie is no dummy.

The second year forward with the Kelowna Rockes realizes what's in front of him. If he is willing to truly put in the work, the 18 year-old may defy the odds by being selected as an undersized forward in next June's NHL draft. An appearance in the 2020 Kia Memorial Cup this May would only enhance those chances.

Crosbie gained 17 pounds this off season. That's a significant amount of girth for a player who tipped the scales at a feather weight of 150 pounds in his rookie season. The Didsbury, Alberta resident knows that extra bulk on the ice will only help his chances of playing with the puck more often than chasing it.

"I burn calories so fast. That is big for me to put on that much weight. I feel stronger and bigger on the ice. It will be tough to maintain this season as I was taking in between 5 and 6 thousand calories a day."

Last season, Crosbie found the back of the net seven times in 63 games as he made his mark in the WHL with a team that struggled scoring. The Rockets had the third fewest in the league (169), with playoff-less Swift Current (135) and Prince George (152) scoring fewer times.

"I think we have a lot of talent this year. We have Hamaliuk and Lee. From what I've seen so far, they are great players and Comrie from Denver, he is a solid d-man. Between those guys and the returnees, I think we will have a fast team this year."
on August 27, 2019 1 comment: 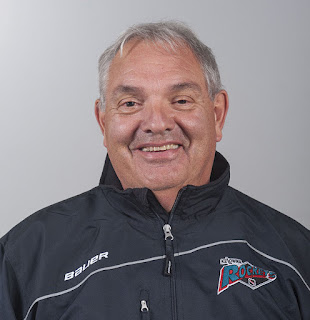 Lorne Frey has seen it all.
The long-time head scout for the Kelowna Rockets will be watching with interest when rookie camp opens at Prospera Place.
"You are always excited to see the new kids. You are always looking for the late developers and we've found them in the past and we are hoping to do it this year".
This is Frey's 30th training camp, including year one when the team was based in Tacoma, Washington in 1992.
"Is that what it is? I can't count that high," Frey says with a chuckle.
Frey likes to make fun of himself, but it’s been his keen eye that has landed the likes of Jamie Benn, Damon Severson, Shea Weber, Duncan Keith, Tyler Myers and Tyson Barrie.
"This camp may be one of our best camps we have had in a while. There are a lot of good young players coming. For whatever reason, I think last year in the draft, there were a lot of players that didn't get drafted that could have got drafted," Frey added.
Close to 160 players will be split into teams, with on-ice sessions running until Friday when main camp opens.
on August 19, 2019 No comments: