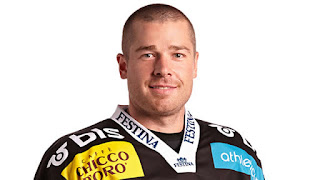 Chuck Kobasew is contemplating retirement and the Osoyoos resident, sadly, isn't likely to go out on his own terms.

The 34 year-old has been plagued by a series of concussions, the latest coming this past season while playing in Bern, Switzerland.

"I've had a few concussions in the last 18 months. I haven't fully recovered. This last one, I spent a number of months in a dark room, in the bedroom with no light and no noise. I was away from my family for four to five months. I just couldn't be around my kids playing and it has been my toughest injury todate".

Kobasew played one season with the Kelowna Rockets in 2001-2002 after leaving Boston College.  With arguably one of the quickest releases in the Western Hockey League at the time, Kobasew scored 41 goals and led the team to a birth in the Western Conference final where they were eventually eliminated by the Memorial Cup champion Kootenay Ice.

The father of two daughters (age 6 and 8) says with his symptoms persisting, it may be best for he and his family to call it a career.

"When it's your head, that's your computer", Kobasew added. "That's what operates your body and when that's not functioning, that's scary. It is a dream to play hockey and someone is telling you you possibility can't play again, it's tough to swallow."

A first round selection by the Calgary Flames (14th overall) in the 2001 NHL draft, Kobasew has played 601 NHL games with the Flames, Minnesota Wild, Colorado Avalanche and Boston Bruins.

"I am going to take the next month and hopefully get back to feeling like myself and I can decide what I want to do, if I am going to play again or that is it. I will leave that decision up to the doctors".
on June 09, 2016