An upgrade at the overage spot 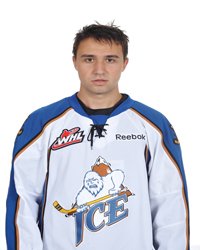 The Kelowna Rockets got a whole lot older in a hurry Thursday afternoon. General Manager Bruce Hamilton made a pair of deals by picking up 20 year-old forwards JT Barnett and Dylan McKinlay.
Barnett was claimed off waivers from Everett while McKinlay was acquired from the Kootenay Ice for a 5th round bantam pick.
The Rockets head into the last weekend before the start of the season with 29 players.
Do the moves make sense?
The Rockets desperately needed more depth at forward, but filling those needs with older players that are no better than a 17 or 18 year-old doesn't make sense. I believe the Rockets have picked up two players that can make significant contributions and are an upgrade from what was in place last season.
McKinlay won't score 50 goals, but he has proven that he indeed can score. He had 15 goals last season with Kootenay, including a hat trick against Spokane. Under Marc Habscheid in Chilliwack, McKinlay scored a career high 20 goals. The fact he is a 7th round pick of the NHL's Minnesota Wild tells you he has shown enough promise over his WHL career to catch the eye of pro scouts.
JT Barnett will be the interesting story here. A 20 year-old that was claimed off waivers tells you he had little market value for a team to make a trade with Everett. Injured for a good portion of last season with a bad knee, Barnett played in less than 30 games with the Tips after being acquired in a trade with the Kamloops Blazers. Prior to a stop in Kamloops, Barnett was with the Vancouver Giants. Under Don Hay, Barnett had his best season with 21 goals in the 2009-2010 season.  So Barnett can score, but can he stay healthy and return to his form of a couple of years ago?
I always take the approach that when a player moves to a new team, he gets a fresh start. It's a clean slate no matter what happened in the past.
Let's face it, time is running out for both players. Making a positive impression in their final season in junior hockey is paramount if they want to follow their dream of playing pro hockey next season.
on September 13, 2012

I like these pick-ups... I think this team lacks leadership and just having three 20 year olds around will definately help the young guns! Having quality 17-18 year olds pushing these new guys for ice time will also make the 20 yr olds have to work hard for the ice time. Smart move by the team as both these guys have something to prove in their final year. Should be fun to watch them gel... I'm encouraged!

Agreed. I think it's putting a 17 year-old in a real tough spot if he is on a teams second line. Let's face facts. Teams that win don't do it with young players. It is how good your 19 and 20's are that make the difference.