Fiesty forward does whatever it takes to win 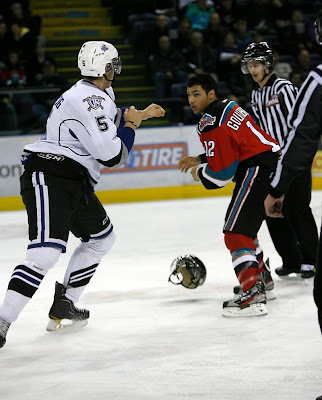 Very entertaining game last night from a fan point of view. lots of goals, fights and was a close game. Rockets seem to be improving there game slowly. Lets hope they can keep it up.

Just wonder if Bruce sees the empty seats and whispers in the crowd how you cant give away free tickets to watch this team. If Brown and Bulmer are on the team after the deadline, you will see even less people. But at least we can listen to Mr Sunshine act like everything is sunny and cherry, and of course deflect by mentioning people who leave early

Even with the empty seats Ryan, they are still sold. So no matter if anyone shows up, if the seats are sold and the revenue is there, who's to worry?
As for the trade talk....what is the trade value of a 20 year-old goalie or a 19 year-old forward?

Wow Ryan... why even write a post like that... it has nothing at all to do with last nights game or anything for that matter... lots of rinks have lots of empty seats in this economy... I think it's great the fan base here has remained loyal and based on the plays of the week videos Kelowna has a lot more fans in the seats then most... PS the Mr. Sunshine thing is getting old and really lame...you should let it go. Try talking hockey for a change. A lot of us want to see Bulmer and Brown play their last seasons here... I know I for one wanna see NHL ready players, playing in my rink... don't you?

Sunny and "cherry"? Now you are comparing me to Don Cherry? Thanks I guess....

It is easy to be negative; I choose to focus mostly on the positive of what is happening. The fans I talk with were entertained by the games this past weekend.

As far as people leaving early; I don't like to see that. I have never left a game early, as a spectator.

I think Bruce knows what he is doing with his team. Check the banners on the far side of the arena, that is not "Sunshine", that is the truth.