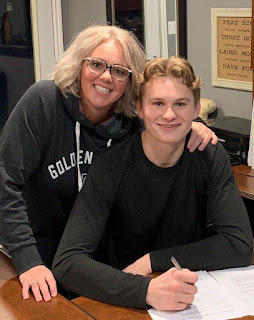 Tricia Korczak was the first to learn her son, Kaedan, had made the roster for Team Canada.

The Kelowna Rockets defenceman became the 18th member of the organization to earn the right to wear the maple leaf at the world junior hockey championships.

"I got an email early in the morning from Hockey Canada and they thought it would be cool if the parents notified the players they have made the team. So, Kaedan's dad and my son Ryder made a FaceTime call to him. I said to Kaedan, we have bad news this morning, you won't be home for Christmas," Tricia said with a chuckle.

While she didn't sleep well the night prior wondering if her son would make the team, there was a sense of relief for all involved.

"It was nerve wracking, the whole thing. I am humbled and honoured that he has a chance to do that. With all of the COVID and the quarantine, it was a bummer for the players and the staff. The mental part of the game must have been difficult  to stay positive, but Hockey Canada did all they could to keep them entertained."

The good news is Kaedan Korczak made the team. The bad news is mom, Tricia, won't be in the arena in Edmonton where the tournament will be played over the Christmas holidays.

"It's terrible. I don't know what it would be like to be at a world junior hockey championship, but I bet it is pretty cool."

Instead, Tricia Korczak will be cheering on her son as she and he family in Yorkton, Saskatchewan watch TSN intently.