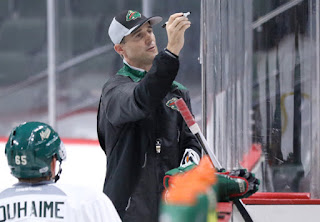 It will be a Kelowna Rockets reunion at Minnesota Wild training camp, if and when that happens.
Forward Pavel Novak was drafted by the Wild on Wednesday, much to the delight of Wild assistant coach Brett McLean.
"I sent him a text message this morning to welcome him to the Wild organization. He sent me a nice text message back. I just said I look forward to meeting him and welcome to the organization and that is very much true. I can't wait to work with him".
McLean says he has an instant bond with a player he has never met.
"I introduced myself as a proud Kelowna Rockets alumni, so absolutely, I will being doing anything I can to help Pavel make the next step", McLean added.
The 42 year-old is regarded as one of the best players ever to wear a Kelowna Rockets uniform, scoring over 40 goals - twice - and representing Canada at the World Junior Hockey Championships.
McLean was named an assistant coach to Dean Evason's coaching staff in Minnesota in late August.
You can't cry over spilled milk. 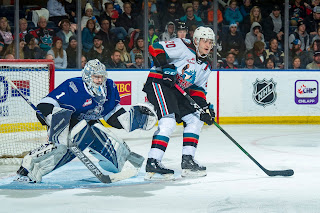 That's how former Kelowna Rockets forward Matthew Wedman looks at the 2020 Memorial Cup being cancelled in May.

"I am lucky enough to get the chance to play in it (Memorial Cup) when I was 17. It definitely would have been a great experience being able to be a go-to-guy on the team at the Memorial Cup".

Wedman believes they would have done well.

"I think we could have won that tournament. We were just starting to put the pieces together and get the systems in place that we needed to. Guys were starting to get healthy and we were looking like a scary team towards the end of the year, so we definitely had things to be excited about".

It was a tough way for Wedman to end his major junior career:

Wedman was named the Rockets most valuable player in 2019-2020, an impress feat considering the 21 year-old dressed in just 35 games after being acquired in a December trade with the Seattle Thunderbirds.

With no hockey to be played and so much down time, it was chance for the personable 17 year-old to work on his golf game.

Wong would shoot a personal best - 76 - at the Riverway Golf Club in Burnaby.

When it comes to his first love - hockey - it was tough to see the season end the way it did.

""We were going in the right direction towards the end of the season, I thought. Our older guys were awesome. It sucks because it is every CHL guys dream to play in the Memorial Cup. I felt especially bad for 'Topper' (Kyle Topping). He was injured the majority of the year, yet he had a great comeback, so it really sucks to see."

The first round bantam pick in 2018 dressed in 58 games, scoring 6 times and collecting 14 points.

"Coming into the league as a rookie, you are not expecting to play first line minutes or power play-one or anything like that, but you aspire to be there and you try to work your way up as the season goes along. You have to look up to the guys who do play those minutes and who are getting out there in the final minutes of the game. Working hard in practice is a huge thing and you will eventually get there".

What does he miss most in early October?

"I am really, really missing the guys in the room and really missing Kelowna. I just want to get back there and start playing again and being on the ice with the guys. I think, as a team, we have a bright future ahead of us."

Heading into his sophomore season, Wong is eyeing next June's NHL draft and hopefully a chance to play for a Memorial Cup when he is 19 when the WHL hosts the tournament in 2023. 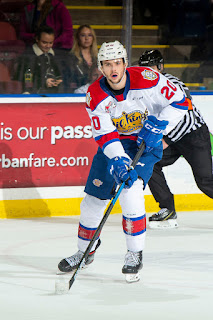 Acquired in April in a trade with the Edmonton Oil Kings, David Kope is itching to join his new team.

The Kelowna Rockets 20 year-old forward is coming off a career season with 37 points in 59 games.

"I was fairly happy (team and personal success) with the season being short and I missed a couple of games. I am hopeful to improving on my goals and points this year. I was on a pretty good team and was put into some pretty good opportunities, but I hope to build on that this year."

When training camp starts in mid-November, Kope will be one of five overage players battling for only three spots.

"For sure, time goes by fast. Honestly, it feels like yesterday I got drafted to the WHL. I am excited to be a 20 year-old and be a leader this year and hopefully we can have a good year."

While Kope told me he knows very few of his new teammates, he grew up playing hockey in Edmonton with defenceman Sean Comrie.

Kelowna Rockets forward Jake Poole handed in his hockey stick for a baseball glove when the season was cancelled due to COVID-19.

While celebrating his 18th birthday in the height of the pandemic, he joined a senior baseball team in Elkhorn, Manitoba where was a pitcher and shortstop.

Coming off his rookie season in the WHL, things didn't come easy.

"The speed and skill of everyone. The goalies are so much better than midget hockey too. I didn't find I could score like I did in midget. There are some things you can't do in the WHL, different moves and stuff, so that took me a while to get used too."

Scoring 4 goals in 59 games has Poole working on all aspects of his game.

"I think skating and being quicker to loose pucks, 50/50 pucks and being more efficient with my stride and not tiring out when guys are taking four strides and I am taking 10."

Poole knows he has discrepancies and is using assistant coach Vernon Fiddler as a valuable resource.

"I like playing in the corners and protecting pucks. Vern has showed me clips of how to protect pucks. Getting closer to the end of the year I was getting a lot better at it, holding pucks down low. That really improved quite a bit", Poole added.

Poole is getting set for a new season by skating 4 times a week in Brandon, which is a 90 minute drive down the road.

A new custom set of golf clubs was on Kaedan Korczak's radar when the season was cut short due to COVID-19.

"I had some old ones that I got when I was in middle school or high school, so they were pretty old.  I decided I wanted a new pair, so I got suited up with those and I have probably gone one hundred rounds I'd say".

If you play that many times, the scores card has to look a whole lot better?

"I would say I am average. I am not excellent but I am not terrible. When I had my old clubs I would slice pretty hard so, now that I have my new ones I can hit it pretty straight".

Of course the goal this year is to play for his country at the World Junior Hockey Championships at Christmas.

"Obviously last year I wanted to make the team. It is a 19 year-old tournament and hopefully I can crack it this year," Korczak added.

Calling them his second mom and dad, Korczak and his younger brother Ryder have a good thing going in Calgary ---  a set of uncles and aunts feed the two as they skate, train and play golf.

Here's an interesting fact. The 19 year-old hasn't missed a single game, over his WHL career, with an injury. 'Korzy' has 200 healthy games under his belt.