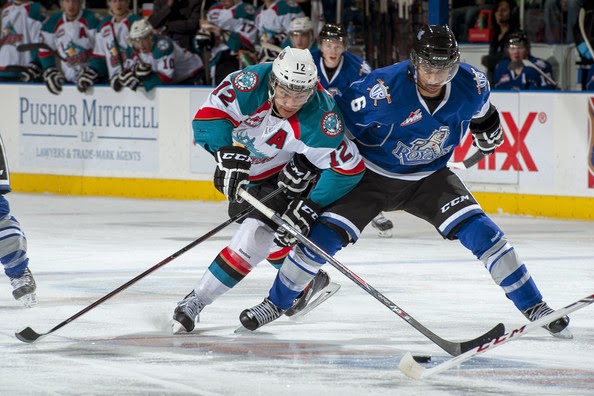 Tonight’s Preview: The Kelowna Rockets are 3-0-0-0 as they play game four of a five game road trip tonight against the Victoria Royals. This is the first of two trips to the Island this season. These two teams’ play tomorrow night too. The Rockets make a return to Memorial Centre on February 20th and 21st. For what it’s worth, the Rockets were 3-1-0-0 in Victoria last season.  These two teams met back on November 5th with the Rockets earning a 5-1 win. Rourke Chartier, Nick Merkley and Madison Bowey each had a goal and two assists in the win. Jackson Whistle was named the games 1st star with a 27 save performance. Following these two games, they won’t meet again until February 13th.  The Rockets are coming off wins against Spokane (4-3) and back-to-back victories up in Prince George this past weekend (6-3 and 6-2). Overall, the Rockets are riding a seven game winning streak having out-scored the opposition 35-14. The Rockets host Portland this Friday and Saturday night in a rematch of last season’s Western Conference final.

Who’s Hot – Who’s Not: Rourke Chartier is riding a league high 10 game goal scoring streak (15 goals over that span) and a 10 game point streak. The 18 year-old has 15+9=24 over that period…Nick Merkley has 3+11=14 in his last seven games and is riding a seven game assist/point streak…Madison Bowey has been held off the score-sheet just four times this season (@Tri City/vs. SC/vs. Giants and @PG)...Riley Stadel has gone 12 games without a goal…Colton Heffley has gone 19 games without a goal. Last goal was Oct 26th in Prince George when he scored twice.

This and That: The Rockets have scored 5 or more goals on the road in 9 of their 13 road games this season. Last year they score 5 or more goals 15 times on opposition ice….The Rockets will play their 14th road game of the season tonight against the Royals. That will tie them for the league lead for most road games played. With tomorrow night’s road game behind them, the Rockets will have played the most games on opposition ice in the WHL…Nick Merkley is 2 assists shy of 100 for his career….Merkley has 15 assists in his last 7 games….Merkley has 13 multiple point games..Merkley had three goals against the Royals last season including two in Victoria…..Last season the Rockets won their 20th game in game 25 of the regular season…Rourke Chartier is tied for the longest goal scoring streak in Kelowna Rockets franchise history. With goals in ten straight games, Chartier is tied with Jesse Schultz, who originally set the mark in the 2002-2003 season. In those 10 games, Schultz scored 13 times…Justin Kirkland played in his 100th career game Saturday night in Prince George…Tyson Baillie and Lucas Johansen celebrate birthdays Sunday. Baillie turned 19 while Johansen turned 17…The Rockets have scored 48 goals in the last 10 games with Chartier earning 24 points….Rourke Chartier is riding an 13 game point streak on the road. The 18 year-old has 17 of his 23 goals on opposition ice….Chartier has been held off the score-sheet three times this season, all on home ice…The Rockets are an incredible 130-28-4-5 in their last 167 regular season games dating back to the start of the 2012-2013 season….In case you are wondering, the Rockets have not been shutout in 99 consecutive games. The last time the Rockets were held without a goal was March 3, 2013 in a 3-0 loss in Kamloops… The Rockets have called up forward Alex Uryga. Originally listed by Spokane, Uryga is playing midget hockey and suiting up for a team in the Vancouver Island Junior Hockey League…Rockets goaltender Michael Herringer is from Comox, BC and played his minor hockey on the Island including with the VIJHL franchises in Nanaimo and Kerry Park. Herringer also suited up for the Victoria Royals, playing in two regular season games with them in 2012-2013. Herringer was a 9th round bantam pick of the Royals from 2011…Rookie Tate Coughlin is also from Victoria. The 17 year-old was named the VIJHL Rookie of the Year with the Peninsula Panthers, scoring 25 goals and collecting 51 points in 43 games in 2013-2014…Tyrell Goulbourne is one penalty minute shy of 400 for his career. Goulbourne has 6 goals in his last four games.
on November 18, 2014