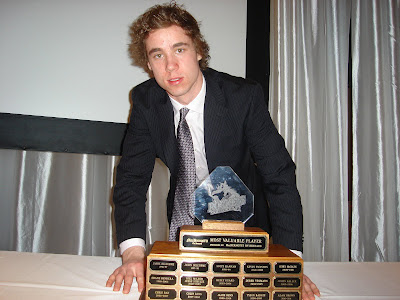 Brett Bulmer was named the MVP at the Kelowna Rockets awards banquet Sunday afternoon at the Coast Capri. Bulmer was second in team scoring this season and led the team in goals with 34.

Brown was still team MVP in my book. He was consistent all season long. Bulmer only showed up really in the final month.

Wow, Brett Bulmer. Maybe he is MVP material when he gives a damn on the ice but so many games he takes the night off!

Brown should have won it

I cannot believe that. He had the potential to be MVP but a MVP plays like one winning or losing. Bulmer had some great games but I would even say the majority were not great.

Brown was on the ice all the time win or lose and always had to try to play his best. He is the MVP.

Never thought there would be such a controversy around a Rockets team award, but I agree ten fold with everything that has been said. Adam Brown was the most valuable player of this team. Never took a night off. Bulmer took more nights off than he had good nights. I feel bad for Adam Brown tonight.

When Bulmer scored the Rockets lost just three times. Pretty impressive statistic. When he was on, Bulmer was one of the most dangerous forwards in the league.
Not sure if this had any factor in the decision but Brown's start to the season was a little slow before he too found his groove. Brown was 5 and 10 in his first 15 starts. Then in mid November he looked like the Brown of old. From November 18th to the end of the season Brown was 17-14-2-3 and appeared to find his stride.

I agree, when Bulmer was on the ice, he was a huge threat, but you can't tell me, or any Rockets fan that without Adam Brown this year, we make the Playoffs.

Yes I agree when Bulmer scored the teams winning percentage was amazing, but how many more games could we have lost if it were not for Brown? Brown was always impressive and win or lose (except for maybe a few bad games) he was always making the big saves. Plus you cant blames Brown for some of the loses either when he got no offensive help.

I do agree with Jared. if it were not for Brown I don't think we would be in the playoffs.


I have nothing against Bulmer. I think he is a great hockey player and will most likely be in the NHL next season, but I just think Brown was more deserving of the MVP award.

Regan...looks like you're sitting on the fence. Who wld you vote MVP?

Brown. I'm an old goalie, so I tend to side with them.