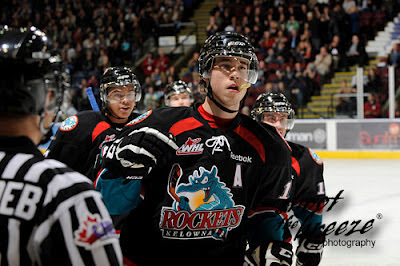 Regan - Thanks for your "honest" opinions and thoughts in regards to Bulmer's actions in Game 2.

I think something that I (and perhaps a few of my fellow Hawks fans) would like to know is - does Bulmer have a history of going "off the deep end" like he did in Game 2.

And because of your tweet that you sent out last night ...here is your useless fact of the day - New Jersey and Oregon are the only "States" NOT to have self-serve gas.

Not 100% sure how you can be so high on Portland and their fans when people like Adam Brown's mother drive down to watch their sons play and get abused in the stands Regan.

You forgot to mention that Adam Brown received the game puck in both games despite getting worked.

Not going to start a flame war on Regans Blog but @Jared a couple or even a few stupid drunk casual fans do not represent the majority of Portland fans.. I know personally if I had seen it I would have put a stop to it as would alot of other regular fans... I responded to Adams tweet and told him that if his mom comes down for game 5 she is more than welcome to sit with me and my family.. while there may be a little trash talk there will be no abusing or harrasment involved.. We all love our respective team and cheer for them ad naseum but be respectful of the fans around you especially the visitors...

Jared, I heard about the treatment Adam Brown's mom received Saturday night and that is unfortunate.
But in my mind this is an isolated incident. Just like when I've heard visiting fans to our arena go public and talk about how poorly they were treated. It is not common place. Kelowna has great fans, as do they. Let's not let a couple of knuckleheads spoil what is a passionate fan base for both teams.

That's good to hear that it seems to only be an isolated incident! The last time I went to a road game, it was the final game of the season, in Vancouver, and we needed the win to get 1st place overall in the league. I will NEVER go back to Vancouver for a hockey game EVER, and it left a sour taste in my mouth for going to away games.

Jared........I was at that same game.....we had know problems. Except that we bought tickets from a scalper, went in & bought 2 beers ea and then found out our seats were in the "beer free" zone hahaha.

Hold up! Is this the same Jared Comeau who made a bunch of obnoxious and ridiculous comments on the WHL facebook thread? Talk about classless fans. Maybe you should take a good long look in the mirror, bud.

Hold up! Is this the same Jared Comeau who made a bunch of obnoxious and ridiculous comments on the WHL facebook thread? Talk about classless fans, you may want to take a good long look in the mirror, bud.

I fully believe a game can be shaped by the first 5-10 minutes. What the Rockets need to be doing is hitting hard, making Portland's big name players afraid to go into the corners right off the hop. We also need to learn to skate away from the scrums after the whistle and get under Portland's skin. Without Tayler Jordan, this Winterhawks team has absolutely no bite to back up it's bark.

A team the Rockets can look up to (to an extent) is the 2011 Boston Bruins. The Bruins were inferior to the Canucks in the skill department by a landslide, but they hit everything that touched the puck and were able to widdle away at the Canucks offense. Keep in mind, the Canucks won the first two games at home as well.

Boston's penalty kill was good enough to support the fact that they were going to take penalties for their rough play. I believe Kelowna's PK is very underrated for how well they hold up against top end talent. Johnston and Bowey are great on the PK together.

That said: There is a fine line between playing rough and taking stupid penalties. We need our MVP to be putting up points and anchoring our (very anemic) powerplay. NOT taking 23 minutes in penalties.