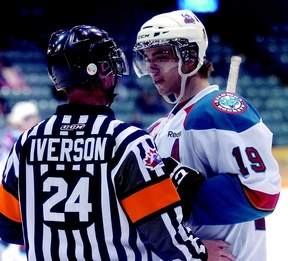 Brett Bulmer will be back in the Kelowna Rockets line up tomorrow night in game four of their opening round series with the Portland Winterhawks.


The Western Hockey League made it official today.

Bulmer served that one game suspension last night in the Rockets 6-3 loss.

Bulmer was suspended after receiving a 5 minute major for kneeing in Saturday's 4-0 loss in Portland.

Although I didn't see the hit I thought it would be more.

I hope Bulmer will maintain his composure and not injur anyone in Game 4. I enjoy wathing players who play with an edge and I understand emotions can run high, especially in a playoff game. However, each player must keep his head and play a responsible game. Brad Ross was guilty of losing his head last year. He's done an excellent job of staying out of the pentalty box this season, putting up some significant points in the process. Here's hoping for an exciting and inury free Game 4.

were done now. atlest yesterday was a good game but bulmer will play his crappy no pass game and were done.

Bigkev - after this series can you do us a favor and get behind Kamloops? Here in Portland, we feel that fandom like yours could really be an asset.